One way this turnaround has been achieved is by treating us all like donkeys.

How come? Well, there are three ways to get donkeys to do things. You wave a carrot in front of their noses. You bash them on the rump with a stick. And most importantly, around their ears, you rattle away on a tambourine. All three work together, to get the donkey’s attention.

Put the three together, the programme should work. Omit any one, and you have a distinctly Sisyphean task, pushing that notorious boulder of altering consumer behaviour uphill.

I want to focus on one case study, where all three dimensions were knowingly employed. And which ended up delivering a really effective improvement in energy efficiency.

The subject matter is domestic gas boilers. In use in around 85% of British homes. Each year around 1.4 million of these are replaced. And practically all of the replacements are now more than 90% energy efficient.

It was not always thus. In the early 1970s, what is still to date the biggest switch in the residential sector took place. To celebrate the discovery of gas in the North Sea, every home previously linked into the town gasworks, and many others on far more intermittent heating systems, got visited. And switched over, onto the national network.

Lots of new boilers were installed. Almost all made in Britain. Many of these have subsequently been replaced, but an alarmingly large minority is still in place. Operating at around 50% efficiency, if lucky.

Boilers are of course quintessentially traded goods. Which means that their effectiveness legitimately falls under the authority of the EU. Some twenty-five years ago, the European Commission tried to set minimum standards of efficiency for residential gas boilers. They succeeded. But with far less stringent standards than they had hoped.

The main country that fought these higher standards was the UK.  On the quixotic grounds that, because our boilers are mostly to be found in a home’s living area (like the kitchen), rather than in outhouses as on the Continent, the “wasted” heat from their inefficiency helped to keep homes warm. Amazingly, this line of argument proved persuasive: no serious EU standards were agreed.

At that time, the high efficiency condensing boiler was a very rare beast. I remember having one installed myself at home. Such was the lack of expertise amongst local gas engineers about this new fangled technology, every time it malfunctioned, somebody had to travel 150 miles from the manufacturers in Hull to effect repairs.

The technology became more reliable. But it remained a distinctly esoteric, niche market product. The similarities in market profile with another “alternative”, high efficiency product, compact fluorescent lighting, are striking.

The first to break the logjam on this was the Energy Saving Trust – then a government agency. It began publicising condensing boilers as a trendy new concept in home heating. It deliberately offered cash back on every installation. Gradually consumers became more aware of the alternative option. A few more heating engineers became familiar with the technology. The market share crept up, almost into double figures.

But the full potential, of delivering a 20% or more improvement on each existing boiler, remained unfulfilled. Enter a determined minister.

Lord Larry Whitty held the energy efficiency brief during the second Blair government. During that time, he presided over a complete transformation in the market for such boilers. So that now almost all new installations are high efficiency boilers, and 85% of these are A rated.

How did he achieve this? First by talking to the boiler manufacturers. And agreeing with them a multi-faceted – and donkeyproof – approach.

It was now clear that the technology worked. But consumers had yet to demand them. And most heating engineers from whom they would demand them, on what is usually a distress purchase – “my old boiler is clapped out” – were yet to feel comfortable installing them.

The deal was simple. If the manufacturers would facilitate, Larry Whitty would provide some pump-priming money for re-training of the heating engineers (carrots). This opportunity for subsidised mid-career retraining would receive maximum publicity within the trade (tambourines). And he would also arrange a special change of the relevant part of the Building Regulations, to make gas condensing boilers the norm (sticks).

This thoroughly integrated programme was completed over a two-year period. It was by any standards an unqualified success. An initial worry that old-fashioned heating engineers would promote a patch-and-mend alternative to boiler replacements has proved completely unfounded.

Indeed the only blemish has been that no extra promotional effort, to encourage continuous faster replacement of elderly but still functioning  boilers, has yet appeared.  The success of the intermittent boiler cashback schemes – particularly in Scotland –  is evidence that the marketplace responds to such stimuli.

But that should not detract from celebrating what is a model of effective co-operation between industry and government. It delivered an important step change in the marketplace for energy efficiency. The old donkey truly learned some new tricks. And we are burning far less fuel as a result. 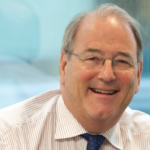 The Soapbox slot is open to members and guest contributors with a message they want to get across to fellow members and to the wider sustainable building world – the AECB website has at least 30,000 people viewing it every year.   If you’ve got an important point to make, email emma@aecb.net explaining what you want to say and why. Soapboxes are around 800 words long – all you will need to supply is the words, and your picture.