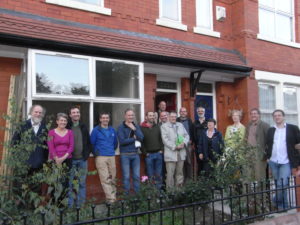 Who are we and what do we do?

The AECB Lancashire Group was originally formed in 2010, holding a number of events over the next couple of years, running seminars, presentations, open house events and meetings.  The photo shows us at an open house visit to see work on a deep refurbishment project in Manchester.

Ideas and suggestions for the group are very welcome – please contact the group leader below. 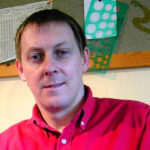 Peter Wilkinson is an architectural technologist and partner in architectural practice EcoDesign, and managing director of both Dales Contracts Ltd and Dales Renewables Ltd. Peter studied at Leeds College of Building and Leeds School of Architecture, and is a member of the Chartered Institute of Architectural Technologists.  He is a qualified planning supervisor and a bench joiner, applying his practical knowledge and skills to the businesses. Dales Contracts became a member of the AECB in the association’s founding year of 1989 and Peter became an AECB trustee in 2003, holding the roles of Secretary to the Board, Treasurer & currently Chair & Company Secretary. Peter became a Passivhaus designer in 2009 and helped later that year set up the Passivhaus Trust (a wholly owned subsidiary of the AECB) and he represents the AECB on the board of the Trust. 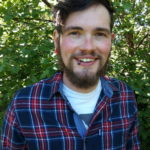 Liam Schofield has spent his career in building working exclusively on energy efficient housing, beginning working on new build on Lancaster Co-housing in Halton before moving  onto retrofit Airtightness including Erneley Close in Manchester.

He has worked on a number of projects in this capacity and co-owned a PassivHaus building company whose work included a Victorian end terrace taken to full PassivHaus standard and a 50’s ex-council house taken to EnerPHit. After working as a site manager and general builder, he has taken this wider experience to focus on Airtightness work for main contractors and self-builders, engaging in training and consultancy as well as installation and leak testing.

He believes training self-builders and contractors to work to high Airtightness and insulation standards is the best way to encourage uptake in energy efficient construction, particularly in the hugely important retrofit market. From his work in construction, he knows builders are more than up to the task of building to energy efficient standards, they just need training and guidance as well as support to make the jump and there is no need for it to be prohibitively complicated or costly.